Mapping the Future of the Albanian Microfinance Sector 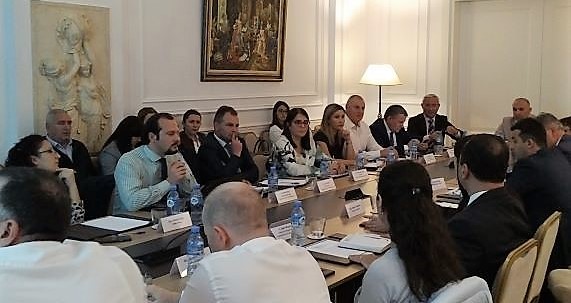 The Albanian Microfinance Association is teaming up with the MFC to map a vision of the role microfinance can play in the future development of Albania and continue the series of workshops for the Albanian National Working Group on microfinance. The establishment of the Working Group is a part of the MFC’s initiative to support dialogue between local actors involved in microfinance and financially supported by the European Commission.

Building on the success of previous events, on 6th November 2018 the Albanian National Working Group held a workshop to discuss legal and fiscal challenges facing the national microfinance sector. A range of high-level officials participated, including representatives from the Albanian Ministry of Justice and Ministry of Finance, the Bank of Albania, the Albanian Deposit Insurance Agency, the IFC/World Bank, the Albanian Banking Association, the Albania Securities Exchange, the General Tax Directorate, the General Anti-Money Laundering Directorate, and the Albanian Institute for Public Policy and Good Governance.

The discussion began by addressing the opportunities and challenges involved in the sector’s lack of a unique legal and fiscal definition. On the one hand, this allows MFIs to adapt quickly to changes in the marketplace, and create different models to meet the needs of clients. On the other, it poses analytical challenges in terms of statistical, fiscal or regulatory considerations. Yet given the high levels of financial exclusion in the country, microfinance has a potentially important role to play. Recent studies put the national financial inclusion rate at about 45%.

The national microfinance sector dates back to 1992, and despite considerable attention from donors and public authorities, it faces grave legal challenges related to the high level of informality characterizing the Albanian rural & urban microenterprises. This has created a legal ‘domino effect’ that starts from the barriers that individuals face to access credit (e.g.: a lack of property title deeds for collateral purposes), and leads all the way up to potentially divergent court interpretations of cases affecting microfinance institutions themselves (issues with addresses, interpretation of contracts, etc.).

Event participants had a very positive assessment of recent legal reform regulating Albanian and discussed whether a similar legislative review is needed for other non-bank financial institutions. For example, some participants pointed to the example of how the by the general tax directorate does not interpret the concept of “financial provisions” equally for both banks and MFIs, a fact which indirectly affects market competition standards. On the topic of potential future legal reviews, several participants raised the issue of how microfinance activity may be funded in the future (e.g.: collecting deposits or issuing public bonds/securities) and the need to potentially introduce the statute of “microfinance banks”.

The expansion of the microfinance sector was similarly analysed through the lens of what does it mean, on a legal and fiscal basis, to operate in a competitive market alongside banks. At the same time, MFI investment in new technologies in the wake of the development of new legal products in Albania (e.g.: electronic signature, e-administration, e-banking, and others) is potential proof of how microfinance can be a pioneer in terms of efficiency and market coverage, despite the costs involved in introducing these new technologies. The event concluded with a discussion on cooperation between MFIs and public authorities, with particular praise reserved for the framework of the future MoU to be signed between the Albanian Government and MFIs, relating to online access of 34 public services, which will significantly increase the speed and security of the lending process. 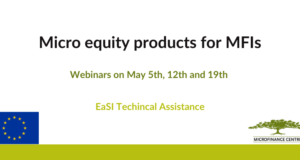