Albanian Microfinance: 25 Years in the Service of Free Entrepreneurship

The Albanian Microfinance Association (AMA) brings together the most consolidated Albanian MFIs with an outstanding loan portfolio of approximately USD 120 million and a client outreach of over 61,000. With a current GDP per capita of USD 4,146 and 45% of its population living in rural areas, Albania shows a strong demand for microfinance products. Most of Albanian MFIs follow a socially-responsible policy targeting financially-excluded individuals and disadvantaged areas.

With the support of the Microfinance Centre and within the Social Performance Fund framework initiative, the AMA organized a workshop on the social dimension of its activity in Albania, which dates back to 1992. This September event was attended by researchers, private and public economists, representatives of the Bank of Albania, representatives of the donor community and various local civil society partners.

Participants highlighted the extremely important role that microfinance has played in the Albanian economy over the years. Totalling close to 350,000 loans, Albanian MFIs have injected more than USD 1 billion into the economy, directly impacting self-employed individuals, small entrepreneurs, farmers, craftsmen and unemployed individuals.

Mr. Bajram Muça, Chairman of the Albanian Microfinance Association declared: “We have been active in the market for 25 years, representing more than 1,100 staff, 220 branches, and supporting employment for hundreds of thousands of individuals. These figures make us proud. We have influenced the life of ordinary Albanians in urban and rural areas, in mountainous and coastal areas, from the south to the north. Today we represent 20% of the total number of active loans in the country. Microfinance serves those individuals who have embraced honest work and free entrepreneurship as their lifestyle“.

The event also featured Ms. Katarzyna Pawlak, Deputy Director of the Microfinance Centre, who recalled the importance that the European Union attaches to microfinance and particularly to the adequate funding of farmers and small entrepreneurs. She noted that “Albania is the birthplace of microfinance in Europe, and serves as important example of a well-developed and balanced sector“.

Statistical data presented during the workshop highlighted the potential long-term viability of the microfinance sector in Albania considering that out of 150,000 active businesses in the country, over 95% of them employ fewer than four people. Likewise, the vast majority of its 350,000 farms start and remain small, with an average landholding of 1.2 ha (10 times less than the EU average)—this in the context of the fact that agriculture and tourism represent 35% of the Albanian GDP.

Local MFIs present reaffirmed their ambition to promote a social model for microfinance in the future and to focus on new fragile categories such returning immigrants. They also addressed public authorities with a specific request to create a dedicated guarantee fund for entrepreneurship. Another proposal emerging from the event related to the creation of synergies with public infrastructure investments (rural roads, urban investments, or water infrastructure) so that they are accompanied by targeted funding schemes for local entrepreneurs and farmers. Likewise, the exchange of databases between public authorities and MFIs, in particular for those sectors with high informality such as the family hotel sector, may provide more efficient channeling of tailor-made products. Other topics related to the support for businesses run by young people, the lack of knowledge of EU funding schemes; the potential upgrade of the sector into micro-banking institutions etc. 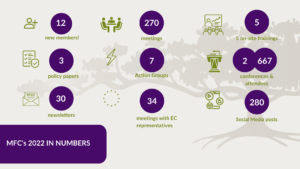 Save the Date! Annual Conference Already 24-25 May Budva, Montenegro

This website uses cookies to improve your experience while you navigate through the website. Out of these, the cookies that are categorized as necessary are stored on your browser as they are essential for the working of basic functionalities of the website. We also use third-party cookies that help us analyze and understand how you use this website. These cookies will be stored in your browser only with your consent. You also have the option to opt-out of these cookies. But opting out of some of these cookies may affect your browsing experience.
Necessary Always Enabled
Necessary cookies are absolutely essential for the website to function properly. This category only includes cookies that ensures basic functionalities and security features of the website. These cookies do not store any personal information.
Non-necessary
Any cookies that may not be particularly necessary for the website to function and is used specifically to collect user personal data via analytics, ads, other embedded contents are termed as non-necessary cookies. It is mandatory to procure user consent prior to running these cookies on your website.
SAVE & ACCEPT